An article originally published in The Conversation by Ms. Liz Giuffre, Lecturer of Media, Music and Cultural Studies at Macquarie University, and someone I always respected. 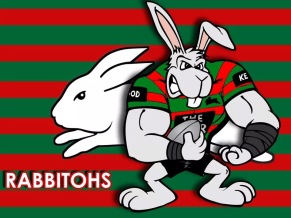 This coming weekend’s Rugby League Grand Final has already made history. The South Sydney Rabbitohs, a team that were on the chopping block just over a decade ago, are now in the big game – against the Canterbury Bulldogs – after 43 years of waiting. Their story has gained attention well beyond a little pocket of Sydney suburbia, with good reason.

The drama of the little team that could has been riveting – and it’s attracted actors, theatre-makers, and comedians keen to tell the story again and again.

Rugby League isn’t a game that obviously and overtly draws artistic types; but the South Sydney Rabbitohs are a different type of team. They are an inner city/south east Sydney team that attracts battlers and underdogs. And the team has been close to the brink many times.

In the late 1990s the Murdochs proposed a Super League competition and Souths, who were lingering at the bottom of the ladder, faced extinction. The fan community rallied and the team has survived – but the showdown with News Limited hasn’t been forgotten.

This week Fairfax newspapers revived the saga, arguing, “whenever you see a Murdoch newspaper claim ‘we’re for Souths’, remember the treachery and call it hypocrisy”.

The battle to save Souths wasn’t just about community versus corporations, but in this case, the media corporation, News Limited, and its desire to take the game to Pay TV. This was a “little Aussie battler” arguing over identity and types of belonging that were much bigger than simply a code.

In 1999, when the future of the team was in strife, tens of thousands of Sydneysiders took to the streets to try to turn the tide. As Rabbitohs fan Andrew Denton put it on the ABC’s Australian Story in 1999, it was a display of: 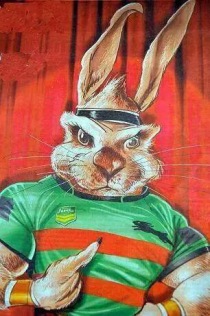 an Australian community and team trying to keep its identity in the face of the corporate dollar and an attempt to squeeze a few more bucks out of Pay TV.

In Denton’s words from that time: “You don’t have to follow football or understand the game to follow [the] story. It’s that old classic David and Goliath”.

By 2001 the team’s fate looked stronger and Australian Story returned again to the Bunnies. Comedian and Rabbitohs supporter Mikey Robbins called the Souths:

more than a story about a football team, it’s about a small community that took on a multinational, multimedia organisation.

The Rabbitohs on stage

In 2004 the story of the Rabbitohs vs News Limited was developed for the stage by writer Alana Valentine and Kate Gaul and supported by Sydney’s Belvoir Street Theatre as Run Rabbit Run. The production broke stereotypes about rubgy league: the show was driven by women, “arty” types and Indigenous communities – not a club of beer-swigging boofy white blokes.

A key feature was the letters of support (and advice for the Murdochs) from people like the broadcaster Caroline Jones. Her letter, as reproduced in the teacher’s notes for the play, addressed Murdoch junior:

Dear Lachlan, it might help if I explain a few things about Australians … They say we’re still not sure what our identity is, but try taking it away from us and you’ll soon find out because suddenly it becomes very clear what it is to be unAustralian. 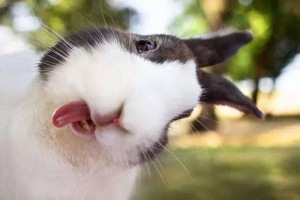 Delivered during the Howard years, when being called unAustralian was the ultimate insult, these were fighting words. It was as if an attack on the identity of a local, historical, social group such as South Sydney was an attack not just on football but on the nation.

Run Rabbit Run covered the drama of the game on its own terms and also dealt with the politics within the Rabbitohs’ traditional fan base, one that encompasses a spectrum of fans including working class, Indigenous and disadvantaged communities, as well as inner city and international superstar types.

From Saint George to Superbacker Russell

The original fight to save Souths came via the former Chairman of South Sydney Leagues Club and former player George Piggins.

He was the man who took the NRL and New Limited to court. The 2001 Australian Story was really his, titled simply “In George We Trust”.

But once the battle to stay on the field was won, the battle to build a winning team was taken over by a much bigger player, or at least one with much deeper pockets – Russell Crowe.

Crowe purchased the team with Peter Holmes à Court in 2006. He has famously bankrolled Armani suits for players, poured rivers of cash into the team’s infrastructure, and made sure his Hollywood mates know what team to support when they’re visiting.

A photo gallery of Famous Rabbitohs Fans includes Oprah Winfrey, Snoop Dogg, Ben Affleck, Eva Mendes, Christian Bale and Pamela Anderson all in bunnies gear – none even necessarily even knowing what NRL is, but at least willing to fly the flag. Crowe and Holmes à Court have made the team financially viable and the code’s biggest brand – not bad for a team thought of a dispensable not so long ago.

As for the actual game this weekend, the team is as strong as it’s been in a long time. Whether Souths win or not – although, wouldn’t it be lovely! – the story of the Rabbitohs remains unique, unlikely and inspiring.