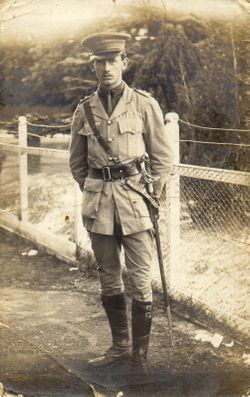 Every year, around ANZAC Day, I share a thought on social media for my Great Grandfather William James Roseland, who perished in France during the ‘Great War’. The greatest sadness for me is the photo below, a loving father with his brand new baby boy who never saw each other again.

Today, August 14 2018, is the 100th anniversary of William’s death. A milestone I nearly missed if it wasn’t for my cousin John Francis Roseland (named after my mother Frances) who compiled the majority of the information that follows.

William James Roseland, born in Brisbane c1893, enlisted on the 7th December 1916 at the ripe old age of 22 and half years old. 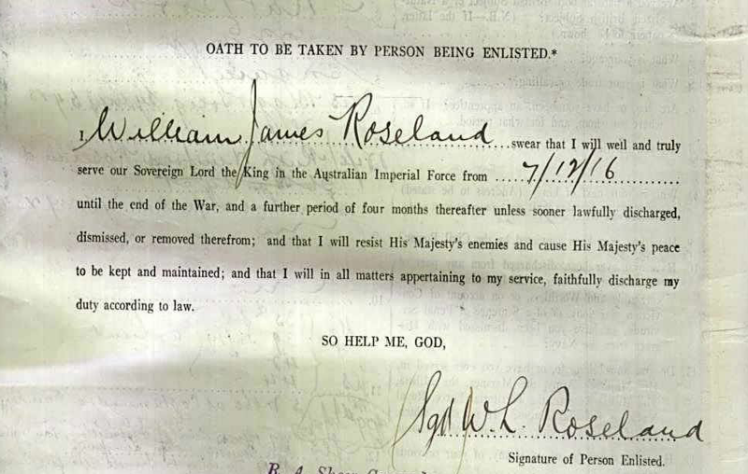 He was 5 feet 9 inches tall at the time of his enlistment, weighed 144 pounds with a chest measurement of 31-34 inches and had fair hair and blue eyes.

His distinctive marks include small scars on his knee. I’m not sure how identifiable this would be for a casualty in battle though, but it was noted all the same. Like so many young men of this time it is believed that he was at least 2 years younger. Meaning he was possibly 21 when he died. You can see below the attestation of his enlistment papers – no date of birth is mentioned. 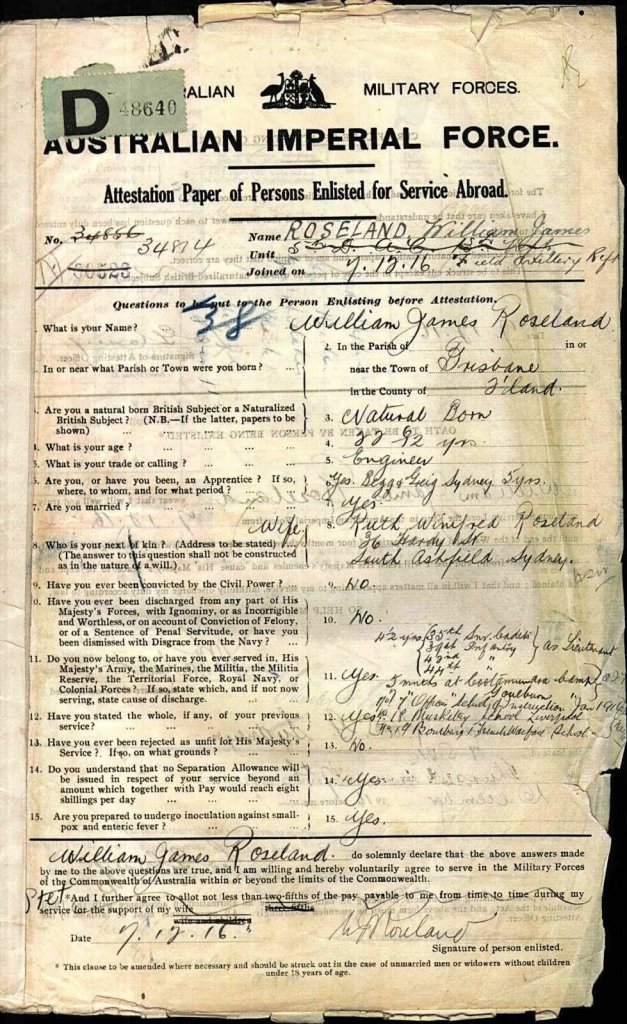 The only son of George and Margaret Roseland, William made his way to Sydney where he married Ruth Winifred Field, or ‘Nanny Field’ as we used to call her.

On April 19th 1917 he fathered his only child, a son, Ronald William Roseland – the baby in the picture at the beginning of this post – our grandfather and a man I loved dearly.

Just over a month later William embarked from Melbourne on board HMAT Suevic. He never saw his wife or son again. The boat traveled via South Africa, and with basic training along the way William soon found himself amongst the horrors of the western front.

As an engineer who had experience handling horses, William was given the rank of Driver. This meant he was in charge of a team of horses that pulled gun carriages in and out of the required locations.

A dangerous mission that left him undefended on many occasions. 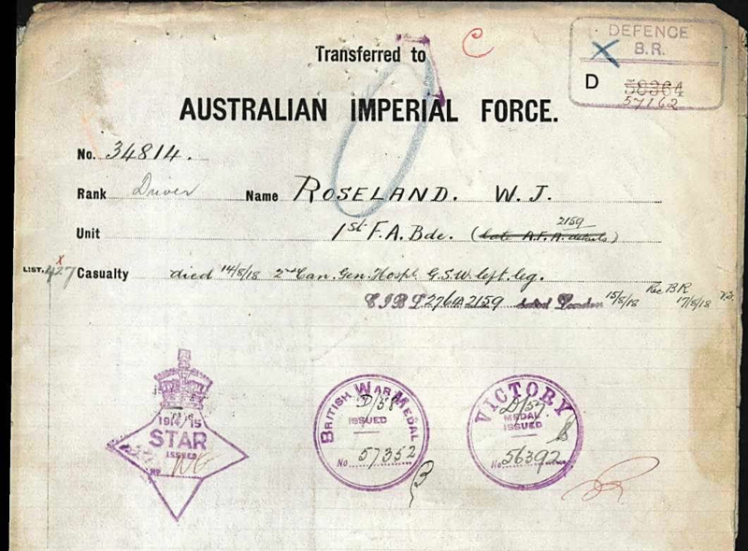 On the 10th of August 1917 Whilst undertaking one of these transports a shell exploded with in his vicinity, which caused some shrapnel to lodge in his leg. A note written by one of his brigade said” I saw Driver Roseland not long after taking the shrapnel to his leg. He was in fine spirits and was not in need of aid to walk to the triage station. “ Adrenalin is amazing, but eventually it wears off.

Unfortunately, there were no antibiotics at this time and within 2 days he was admitted to the 2nd Canadian General Hospital. Things then became critical with the leg turning gangrenous. His leg was removed however it was too late as sepsis had taken over his body. On this day 100 years ago he died in a faraway country with no family by his side.

He is buried in the Mont Huon Military Cemetery (Plot VII, Row A, Grave No. 2A), Le Treport, France. 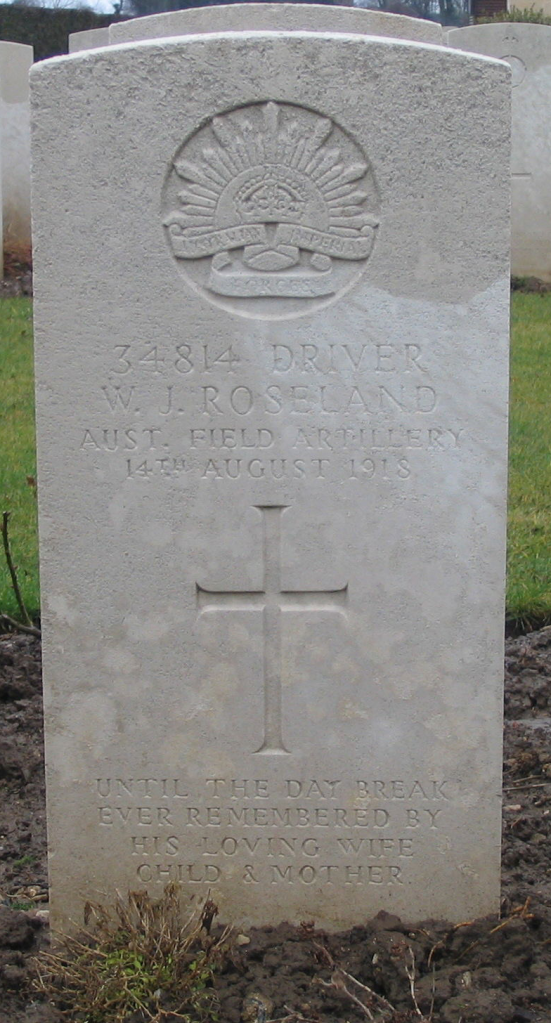 After his death my great grandmother was devastated. A young mother, with no income other than a war pension, wrote to the AIF desperately seeking her husband’s effects. Her penmanship is perfect, but the date is over nine months since William’s passing. 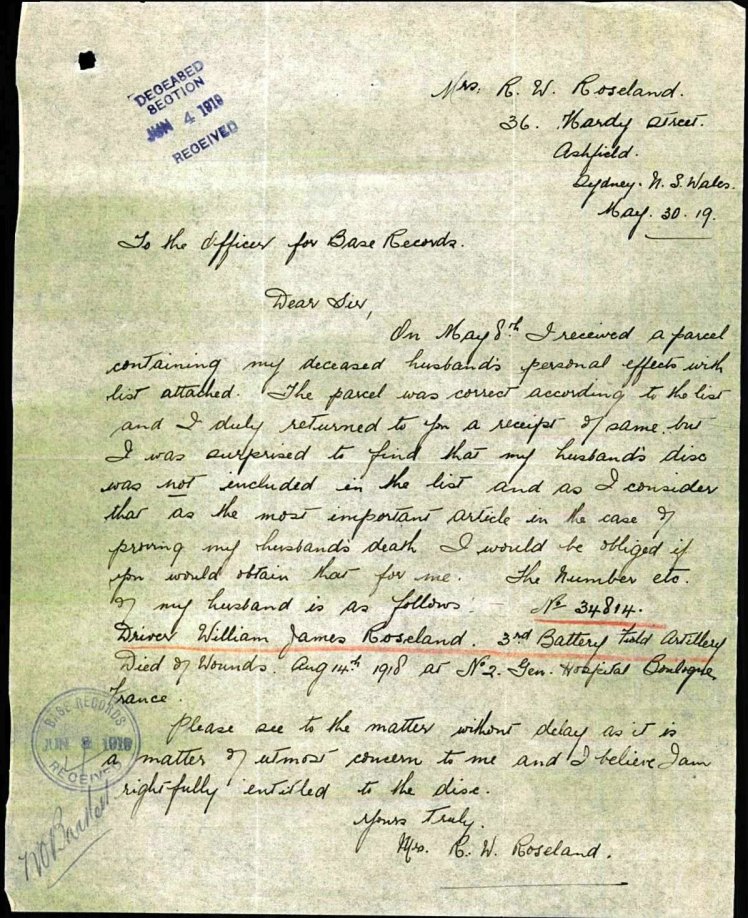 The reply is a sobering reminder of the futility of war. 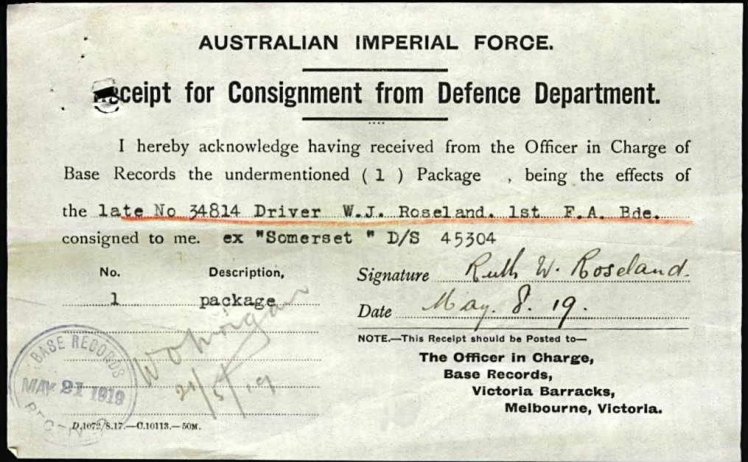 A bible, a thimble, a wedding ring…William wasn’t sending much home other than his love.

I’d like to say that I miss William James, but I never had the opportunity to meet him. I did name my youngest son Lachlan James after him, in his honour. I did have the pleasure of knowing my great grandmother’s second husband, who we affectionately called Pop. He was a lovely man who died when I was very young. He was in his nineties and I was less than ten.

War is Hell, or so the saying goes. But Alan Alda said it best in an episode of MASH when his character, Dr Hawkeye Pearce suggested that war was worse. When he was questioned by Father Mulcahy how he arrived at that conclusion he asked who went to hell. Fr Mulcahy said that Hell was for sinners. Hawkeye said that, unlike Hell, innocent people died in war. I agree with Hawkeye, war is worse. 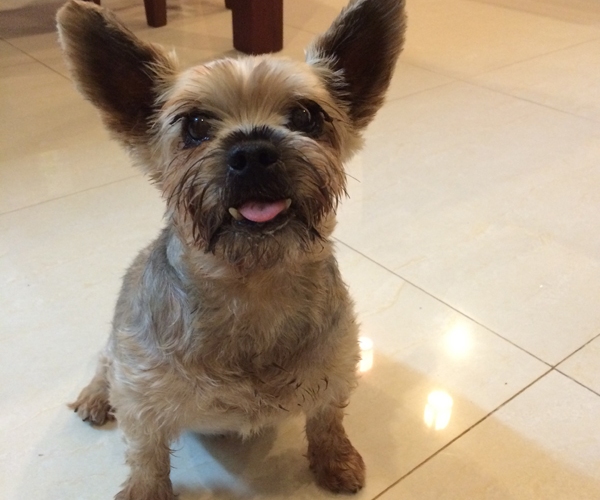 The toad licking, snake killing defender of the villa has finally met his match. Unfortunately his four remaining teeth and fierce determination were not enough to defeat the illness invading his brain and he fell into a final, peaceful, sleep resting against the feet of those that loved him most.

No more chasing cats, barking at the birds, or coffee on the stoop with Heidi. He was more than just a canine, he was a companion and he will be sorely missed.

Rest in Peace Benny. Although you lived longer than you should have, it was still not quite long enough 😦

I was doing a tour of the European International School in Vietnam yesterday, and as I stood in the outside the library, wearing a navy blue suit and dark sunglasses, I noticed a highly animated little boy, around four or five years of age, desperately trying to get his friend’s attention.

“That man,” pointing in my direction. “He looks like a secret agent.” 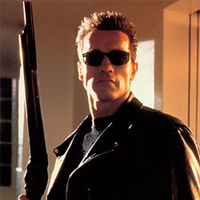 I am now fully aware that these two tiny lads are looking up at me all slack jawed and wide eyes, with a mixture of awe, trepidation and respect. I must have been about twice their size and, I suppose, slightly sinister in my appearance. Probably a bit like Lurch from the old Addams Family television shows, or perhaps Arnie in Terminator.

I looked down at the kiddy who started the commotion, folded my arms across my chest and said, “I am a secret agent.”

Well I’ve never seen children this happy outside of Christmas as they proceeded to rush off and tell everyone who’d listen that they just met a spy. Now I know how 007 feels whenever he gets to introduce himself as ‘Bond, James Bond’. 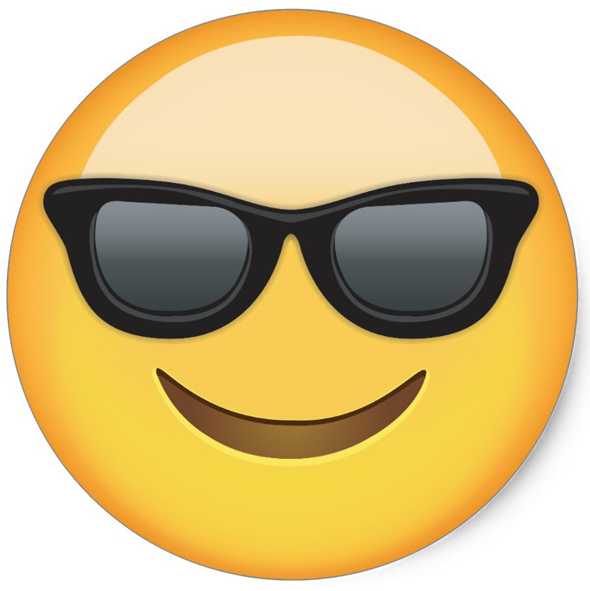 With elbows akimbo and armed with shopping trolley tanks, the lovely old ladies of Leichhardt form a formidable phalanx.

Meandering around market town with an unclear agenda the bombastic bundles of energy talk at a million words a minute, in a Latin language long forgotten. With a flurry of fingertips and rapid fire hand gestures, their conversations are delivered simultaneously without pause or breath.

Too often have I braved the aisles of Woolworths only to be trampled by these ancient cherubs, with never a ‘sorry’ to be spoken. They own the aisle and possess the poundage to hip-check you away from the ‘on sale’ olive oil whilst rummaging through the rigatoni, groping the garganelli and testing tomatoey tautness.

As I prepare to move away from Leichhardt there is still one question burning in the back of my mind, where are all the Nonnos?

Well today I found out. These mellowed men of Milan are sitting in the sun, enjoying espressos and crunching creamy cannolis whilst their wonderful wives wreak havoc. 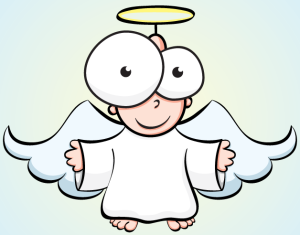 I was in my local cafe yesterday morning, quaffing a quick cuppa and watching the antics of the extended family occupying the al fresco area. Grandpa was having a ball as the dynamic duo of Lilliputian princesses climbed all over him. Grandma had a very young one all snuggled up in her lap, and mummy was gently rocking the perambulator back and forth in a vain attempt at coaxing the tiniest one of all back to sleep. It was a privilege to observe such a happy family unit, but as I paid for my cappuccino all hell broke loose.

The first thing I heard was mummy’s scream. It was loud, plaintive and came straight for the deepest part of her soul. No horror movie has ever captured such a sound of wretched terror and the only noise to compete with it was the elderly banshee with the baby in her lap. My head swivelled sideways faster than a barn owl just in time to see a yellow angel, with pink ribbons adorning curly brown pigtails, race across the road after her Grandfather, who had taken her older sister to the park on the other side.

For a moment it appeared that time had actually stopped and was trying to reboot in a slow, deliberate process.

A tiny frightened girl stopped in the middle of the street and burst into tears, unsure whether to turn back or keep going, and afraid that she was going to get into enormous trouble.

A seated Grandmother threw her arms out, desperately hoping that her reach would magically extend to ensnare her grandchild.

A mother’s shoes refused to grip the ground as she tried to leap the many metres that separated her from her child.

And, with three mighty steps, a Grandfather found the strength of youth when he bounded into the road and scooped up the crying little one. 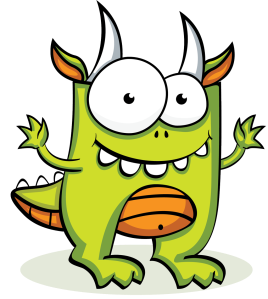 Thankfully the bus service was running late and no other traffic was on the road at the time, so everything ended fine with the siblings happily heading off to the playground.

The whole experience occurred in mere moments, but as the adrenalin began to wear off it caused me to reflect on a similar circumstance that happened many years before. Our third son Granny, who was always pushing the boundaries of acceptable behaviour and is single-handedly responsible for the majority of my grey hairs 🙂 decided one day that it would be fun to run out on the road and see how far he could get before mum or dad caught him. The street he chose though was not as quiet as the one yesterday and I can still see the look of panic on the occupant’s faces as their cars swerved to miss him.

Granny is fine of course, and has just graduated from high school. But I learned that day that the price of parenthood includes vigilance. Kids are predictably unpredictable and that can place them in all sorts of predicaments – both good and bad.

So, as thousands of our little monsters hit the streets hunting for Halloween treats, please do iDad a favour and hold onto their hands.