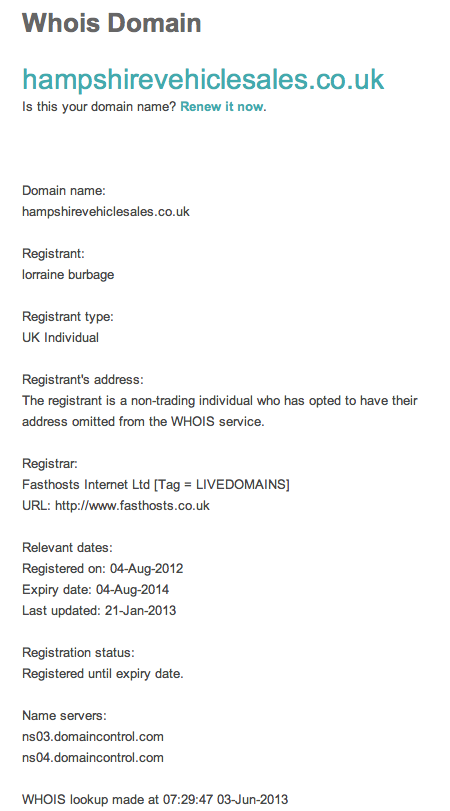 On the 30th July 2012 the dodgy dealings of webuyanycar.com.au (WBAC) finally came to a head and the company was sent into administration and ultimately, liquidation. Many people lost money including employees, business associates and customers who sold them their motor vehicles in good faith.

I wrote about this unethical dealership in three blog posts. The first one titled Life Lesson Well Learnt outlined my own personal experiences in dealing with them before they went broke. With the flood of comments that soon appeared I realised I wasn’t the only one to experience their callous disregard for other peoples property. Luckily my story was able to find its mark and prevent others from suffering the eventual loss.

My second post came out after they were already placed into liquidation. In that article I included correspondence from Mr. Jeremy Herbert from webuyanycar.com in the USA who was keen to point out that they had no relationship with the Australian business or the Burbages. Unfortunately, it was already too late for many Australian consumers so I pointed people in the direction of Worrells solvency agents to make their case.

Other sites like Stuff Review and Product Review were also doing their best to inform the public as to the devious dealings of the Burbage business, but unfortunately all we could do was become a sounding board for those that had already been hurt.

Then everything went quiet. There has been nothing in the Australian press on the subject of WBAC for many months now and it seemed the Burbages had become harder to find than Christopher Skase. Their dead-of-night Houdini act cost them a million dollar home in Fig Tree and wife Lorraine’s $200,000 Bentley. It also cost around 1,200 trusting consumers over $3.6million dollars according to the Courier Mail.

Back in March this year I received a comment on my article about WBAC going into liquidation from a reader who was convinced that Hampshire Vehicle Sales in the UK was a new business that the Burbages were involved with. I ran the comment and was contacted five days later by Mr. Ryan Overton who claimed to be the proprietor of Hampshire Vehicle Sales and had no affiliation whatsoever with the Burbages.

Mr. Overton stated that he was the sole Director and owner of that company and that they were doing their best to trade through difficult times. He asked me to remove the links and, finding no evidence to link the Burbages to the company, I did so as a gesture of goodwill. Unfortunately I may have been misled.

Stuff Review ran an article over the weekend also linking Hampshire Vehicle Sales with the Burbage family. They went so far as to perform a whois search to ascertain the registrant of the website and according to their site it is Lorraine Burbage. I checked this last night and found the same information – see the image opposite.

Needless to say the comments are now back visible on my website.

Over the weekend I received an email and a comment on one of my posts from a Mr. Henry Winster who informed me that,

“Mr Burbage has been summoned to attend the Federal Court in Brisbane to answer questions in regards to his involvement as a director in the company. This is to be held on 3rd July 2013 I think. Worrells have more information for people wanting to attend as it is open for the public to view. Mr Burbage is not in Australia but has fled back to the UK where he has opened up another business with I guess the same intention of ripping off customers again.”

I checked the Commonwealth Court Portal and both Richard Burbage, and his business partner Mr. Armand Daiga have been summonsed to appear. The case number is: QUD171/2013. If you want to look it up yourself follow the link and click on ‘Federal Law Search’ in the top right of the image on the page you are directed to. You may have to accept the terms of use but after that you will on the search page where you simply enter the case number and hit ‘Search by file number’.

The guys at Stuff Review also picked it up Mr. Winster’s comment and added,

“Regarding webuyanycar / Karlands liquidation. Worrells are currently conducting a public hearing in the Brisbane Federal Court and have already questioned key secure creditors and Karlands ex accountant. A second 2 day hearing is scheduled for 2nd & 3rd July in Brisbane where both directors (Burbage & Diaga) have been summonsed to appear. Whether both will attend is yet to be seen as Burbage is in the UK and has started a similar business.”

Whether Hampshire Vehicle Sales is a Burbage concern or innocent bystander remains to be seen however, just because their names don’t show up on a company search does not mean they are not involved. In my experience ‘silent partners’ are not always that silent so, if you are going to transact with this company do your research and perform your due diligence before you part with your car.

And to everyone in Australia still feeling the pain, good luck and stay strong.