Ladies and gentlemen as I’m sure you are all aware today, the 21st of July, is National Lamington Day. It is a day to celebrate this iconic Australian delicacy so glorious in its flavour, especially with its layer of strawberry jam in the centre and an optional dollop of whipped cream on top, that it rivals the French truffle as the number one desert choice for backpackers and the dollar conscious alike. So popular is our national cake that thousands of schools from Wilsons Promontory Presbyterian Ladies College in Victoria to Steep Point Primary in Western Australia and the Cape York Catholic Grammar have used it to raise funds for the local community. Without the lamington our ‘Stop, Revive, Survive’ campaign would have become ‘Stop, have a Kit Kat and for Heaven’s sake don’t use the portaloo’. 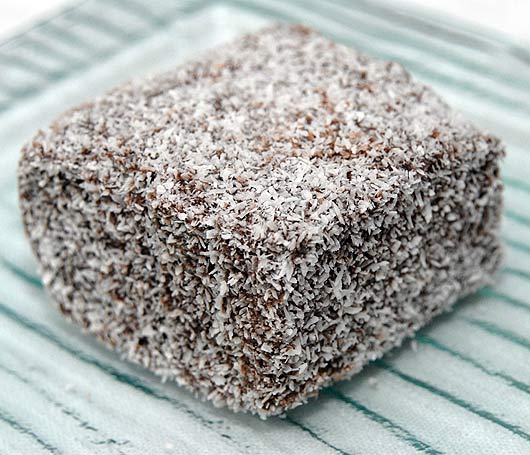 But where did the Lamington come from?

The roots of this spongy delight dates back to Scotland where William Baillie, the Laird of Lamington, waged war on Clan Olgilvy at the Battle of Brechin in 1452. Fresh food would not last long out on the windy moors so the enterprising Scots invented a rock hard loaf of bread that was dipped in tar and coated in sand for extra roughage. Unfortunately they were soundly beaten by the Earl of Angus, who had excellent supply routes to the tastiest beef this side of Wagyu Farms, and the leftover lamingtons were used to shore up the broken walls of his castle.

It wasn’t until the 1700’s that the humble lamington was to make another brief appearance on the menu. The owners of Sporran Street Bakery, descendants of William Baille, inherited the old family recipe and began tinkering with the ingredients. Eventually a marvelous concoction of sponge, haggis and chocolate was launched upon an unsuspecting United Kingdom. The result was the Jacobite Uprisings, which culminated in the Battle of Culloden in 1745.

While the Duke of Cumberland was busy sweeping all before him the Earl of Airlie was rumoured to have stolen the lamington formula and escaped to France. Several years later he boarded the Lady Penrhyn and came to Australia, where he found a secluded beach in what would later be know as Queensland, named it after himself, and became a recluse. The humble lamington was once more lost to the world.

Then, in 1880, a strange thing happened. Students from the Mosman MasterChef College were on a field trip to Airlie Beach when one of them stumbled upon the bleached bones of long dead Frenchman still wearing his tattered Lacoste polo with a faded crocodile on the breast pocket. Lodged between the gritted teeth of a crazed and sun-scorched skull was a leather parchment covered in a Gaulish scrawl. The precious paper was prised from the jawbone and brought back to the Home Economics department; and the Iced Vo Vo was born.

So successful was the latest interpretation of the ancient recipe that Arnotts acquired the rights to mass produce the biscuit and provide it to an international audience, which is where it was discovered by Charles Wallace Alexander Napier Cochrane-Baillie (descendant of William Baillie), also know as Lord Lamington the Governor of Queensland.

The combination of desiccated coconut and pink fondant stirred up sub-primal salivations for the Lord and his Lady. Ancient emotions had awoken causing intense and confusing feelings, which frightened the couple. In an attempt to beat the addiction they retreated with their entourage to Harlaxton House in Toowoomba. There they managed to resist the cravings for several weeks but eventually the over powering desire for dried slivers of Cocos nucifera became so overwhelming that the Governor and his wife began hallucinating.

Fortunately, before the couple were able to move to Kingaroy and establish a peanut farm, the house cook came to his senses and decided to try his hand at creating his own version of the tantalizing biscuit. The only ingredients he had available was day-old sponge cake, strawberry jam, cooking chocolate and a single large coconut, so with one eye closed and his fingers crossed, he began to put it all together. The guests were enthralled by the new treat, dubbed dandruff balls by the psoriasis-suffering chef, and began consuming them in vast quantities. Finally sanity prevailed and Lord Lamington decided to share his title with the delicious cake.

The rest is history. 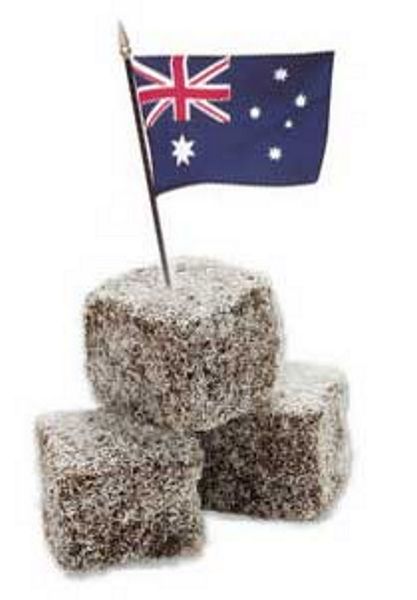 Since its inception in Australia that magical day in 1886 our lamington has gone on to inspire greatness within our people. In 1915 the Labour Government declared 20,590 hectares of old growth rain forest to be the Lamington National Park after our beloved desert. Later that same year the 1,700m mountain in the Oro Province of New Guinea was also named for the squishy cake. Unfortunately the same mountain erupted in 1951 killing over 3,000 people but that’s another story.

Nowadays the lamington can be found in tuck shops, supermarkets and at ex-pat barbeques all over the world. So lets raise a mug of Bushells to the sky and shout hip hip hooray for National Lamington Day.

Perhaps next year we will make it a public holiday.

Serious Note: The Variety Club, in partnership with Top Taste, has used National Lamington Day in the past as a means to raise funds for The Children’s Charity. From what I understand they have been very successful in their endeavours.