Way up high in the very wettest part of Northern England lies a tiny tidy town called Privy on the Verge.

It has one pub, one bank, one post office and forty two locals happily hidden away in their own little piece of anonymity.

One of these aforementioned chipper citizens is Ms. Patricia Thwackery, the assistant bank manager. Patti Thwack, as she is affectionately known to her friends, had moved to Privy on the Verge to escape the hustle and bustle of her home town of Bean Toot near Boghead. Two convenience stores was too much for Patti, who preferred the quiet country life.

As a dedicated spinster, nothing out of the ordinary ever happened to Patti until the day an eloquent frog hopped by for a loan.

Patti stared, mouth agape, at the talking amphibian. Perhaps the mushrooms she had eaten for breakfast were not as fresh as she thought. Unperturbed by her silence, the croaker continued,

“I’d like to borrow some money to buy section of the pond in which to raise my tadpoles please.”

Patti was mesmerised by the shiny green skin and large black eyes, but eventually found a voice of her own.

“I see. Well we need to fill out this application form. May I start with your name please.”

“Certainly,” replied the potential mortgagee. “My name is H.R.R Richards.”

“And what does the H stand for Mr. Richards?”

After several more minutes of form filling, red tape and boring bureaucracy the application was all but complete – except for one minor hitch.

“Mr Richards you have no deposit, no references and no collateral. I don’t think we will be able to give you the loan you require.”

Faced with the soul crushing possibility of an unfulfilled dream Hoppity remained as serene as only a frog can.

“I may not have any money Ms. Thwack but I do have this letter from my father Keith, offering to go guarantor for the loan.”

A webbed foot handed Patti an envelope. By now the entire town had heard of the polliwog powwow and had turned up at the bank to see what was happening. Even the the stuffy old Bank Manager had come out of his musty office to see what the fuss was all about. 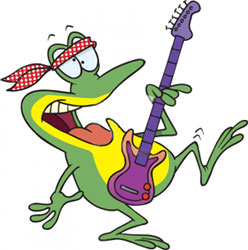 Patti opened the letter and exclaimed, “Your father is Keith Richards!?!”

The crowd gasped and the frog continued.

“If that’s not enough for you I can offer you my prized possession as collateral.”

Stick fingers plopped a miniature porcelain figurine with no definable features onto the counter. A perplexed Patti turned to her boss and said,

“Here is an application form, a letter from Keith Richards offering to guarantee a loan and, well, I have no idea what this other thing is.”

“It’s a knick-knack Patti Thwack give the frog a loan. His old mans a Rolling Stone.”