Did you know that crocodiles cry when eating? Its true! 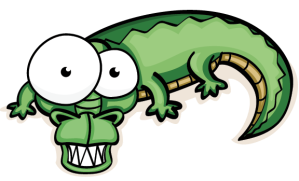 Crocodiles, and their cousins the alligator, are deeply sensitive beasts who often spend hours at a time rationalising the forthcoming slaughter and mastication of the baby zebra playing at the edge of the waterhole. Taking a life does not come natural to natures ‘gentle lizard’.

You see, crocodilia are ancient creatures from the late cretaceous, a time when life was simple. A time when Raptors ran through the rapeseed, Gallimimus galloped through the grass, Diplodocus danced in the daisies and Tyrannosaurs tip-toed through the tulips. Volcanoes announced their eruptions weeks in advance and asteroids waved hello as they passed by at a safe distance.

Weekly meetings of Predators Anonymous were held amongst the heather to assist those poor unfortunate individuals who were born without molars. Many a despondent Deinonychus was counselled by a caring caiman during those early days. It was a peaceful time, a happy time, until a fuzzy little biped with opposable thumbs began sharpening sticks and throwing stones.

Nowadays the old croc is all alone in the world. His ancient acquaintances are either extinct or evolved into birds, and whenever he tries to smile at a human he gets shot in the head. There is no support group, no outlet for his emotions. So when he kills, and kill he must, he sheds a little tear.

So please try and remember this story when you meet our scaly friend. And if he happens to have a little nibble on your bum well, as Homer Simpson once said, ‘its just like going to sleep – in a blender’.

A ring, a ring o’ roses,
A pocket full o’posies
Atishoo atishoo
We all fall down.

What a cute, nonsensical nursery rhyme – NOT!!! Its actually an evil little ditty about death and decay, dating back to the first outbreak of bubonic plague in England in the 1300’s

Old Mother Goose, the wicked witch of Westfarthing penned the poisoned words in the basement of her thatched hut where she brewed the black-death in a blood soaked cauldron. Scared yet? You should be!

Ring-a-Rosie refers to the raised round welts and weeping lesions that initially infected the doomed individual.

As their skin decayed and began to slough off the their bones, a fetid reek would begin to effuse the environment. Victims would stuff their pockets with herbs and wildflowers to ward off the stench. The most common flora available being posies, hence the second line of the rhyme.

Sneezing helped to spread the disease, as did coughing up blood and the lack of an adequate sewerage system.

We all fall down – You’re dead!

Nowadays we read this poem to our children in complete ignorance of its insidious meaning, but pityriasis rosea still exists people and it’s an itchy legacy of the Goose woman.

3 thoughts on “Even More Interesting Trivia?!”