One of my fondest memories of life with our first born was watching the interaction between No.1 and my wife. Dirty nappies, bath time, bottle cleaning, teat boiling and projectile vomiting – Blue Eyes took it all in her stride and still found time to blow raspberries on his belly, powder his backside, cuddle with him and talk to him in a language I’m sure only they understood. iDad on the other hand seemed to spend the first twelve months with my jaw agape in astonished horror, waiting for No.1’s head to start spinning. I actually suggested at one stage that we change his name to Damien but Blue Eyes knocked that idea on the head and then did the same to me. 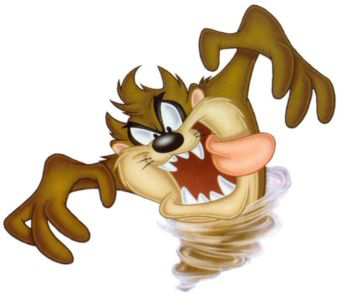 Thinking back on it now I suppose I shouldn’t have been too surprised. As the sole grandchild on both sides of the family No.1 was spoiled rotten. Red cordial, green jelly, chocolate, and lollies with more sugar than a Krispy Kreme doughnut, conflicted with the bland soy formula that Blue Eyes and I had tried desperately to get our little boy to eat. As a result we spent many a Sunday night watching No.1 bounce of the walls before the sucrose withdrawal finally caused him to crash into unconsciousness. It was a sight akin to the Tasmanian Devil tearing his way through the scrub in a frantic search for Bugs Bunny, the only difference being that our devil was toothless. Through the week we would ween him back off the white powder and bring his eczema under control, all in preparation for the next round of grandmotherly love.

The real clue was the finding of soggy, half-sucked french fries in his nappy from time to time. The culprit though was never identified.

‘Maccas’ opened the flood gate so to speak and more words quickly followed. Having both a grandmother and a great-grandmother on one side of the family caused but a moments pause for No.1 and so ‘Nanny’ and ‘More Nanny’ came into being. The grandfathers though were a little more difficult. My wife’s family is partly of Lebanese descent and the Arabic word for Grandfather is Jidi (pronounced zhiddee). Unfortunately the Australian vernacular often mispronounced the ‘zh’ as an ‘sh’ and so Jidi refused to be known as Shit-tee. It was a fair request, upheld by most members of the family, and because the other adults referred to Jidi as ‘K’ No.1 began doing the same.

My father on the other has was a little more stubborn. He refused to accept the fact that he was now a grand parent so Grandpa, Pop, Gramps etc were all off limit. So my son did the only thing he could do and that was to invent his own name. I’m still not sure to this day whether ‘Bynel’ was actually pleased with being called ‘Bynel’ but I do know for a fact that grandma was none to pleased with being dubbed ‘Mynel’. She seized every opportunity available to get No.1 to change her nickname but for many months Blue Eyes and I would get daily requests to visit ‘Bynel’ and ‘Mynel’.

My sisters fared better than my parents and to this day they are still known as ‘Dee’ and ‘Pee-Dee’ whilst my brother-in-law, who was a huge bear of a man, simply became ‘Bop’. On my wife’s side of the family we got ‘Dabe’, ‘Doughie’, ‘Muck’, ‘Wibby’ and ‘Dinta’ to add to the mix.

A child with allergies is a terrifying experience and iDad quickly worked out the fastest route to Prince of Wales Children’s Emergency from every part of town. Watching their little faces puff up with anaphylaxis and not knowing the cause is the stuff of nightmares. Blue Eyes and I spent two Christmas Eve’s in the Asthma Ward at POW with a number of other little kiddies and their bewildered, frightened parents.

There was one incident in particular that haunts me to this very day. No.1’s face and neck was so swollen with the allergic reaction that he was almost double in size. I had dropped him off at Emergency with his mother and dumped the car illegally in the handicapped zone. I’m not sure what the thought process was that made us to drive to hospital instead of calling an ambulance, only that blind panic makes you do the craziest things. As I crashed through the automatic doors my wife tore a photograph out of her purse and thrust it into the face of the apathetic orderly, screaming at the top of her lungs,

“This is what my boy is supposed to look like.”

The dawning apprehension that we had not arrived with a miniature sumo wrestler hit the orderly, the triage nurse and the resident doctor simultaneously and No.1 was quickly snatched from our grasp, injected with adrenalin and placed on a ventilator. We sat together for hours that night in the semi darkness holding hands. Neither one spoke, words weren’t necessary. We had come as close as possible to losing our child and the tears, sniffles and sighs of relief were the only noises outside the click and puff of the oxygen mask. 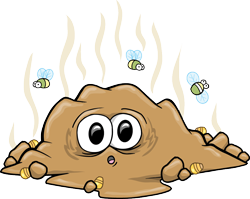 We knew right from the start that No.1 would have allergies. Blue Eyes suffered from eczema as a child and iDad was an asthmatic from way back. This is why we started the little guy on soy formula as soon as he started biting the breast that fed him. The side effects of soy leave a heck of a lot to be desired I can tell you. Finding an old rancid baby bottle that had fallen under the seat in your car is a smell I will never forget. Neither is the odor of said formula when it has been spilled on the floor and cooked in the summer sun. But worst of all are the soy scented nappies; and No.1 was the master of poop.

iDad learned from early on to always carry a collection of shopping bags in the car. If you cut some holes in the bottom for his legs and pull the handles up over his shoulders, you effectively get an inexpensive pair of plastic overalls. There have been many occasions when we have had to employ the ‘Franklins Tactic’ and beat a hasty retreat. No.1 has befouled high chairs in restaurants from the Sutherland Shire to the Gold Coast, leaving his indelible impression on waiting staff and costing iDad a fortune in extra tips.

The worst episode however was the day we took No.1 to visit his great grandfather in hospital. As we tootled along the Grand Parade at Brighton Le Sands the familiar baby chatter in the back was replaced by a constant whining ‘er, er, er’ noise. Blue Eyes was driving so iDad looked over the back to see what was the matter. The soy explosion had not only exited the cuffs of his shorts but it was pouring out of his shirt sleeves and over his collar. It was in his hair, on his hands, all over the car seat, the window, the door and worst of all it was in his mouth.

“Honey, we need to pull over.”

“Why darling?”
“Ummm. Its best if you see for yourself.”

With the Camry idling in Bay street Blue Eyes looked over her shoulder. No.1 smiled with a mouthful of poo, held out his hands and said,

Whether that translated to yucky or lucky I have no idea. All I know is that a white t-shirt is not the best article of clothing to be wearing when you clean up that volume of excrement and by the time we got to St Vincent’s No.1 was the only one not coated in poop.